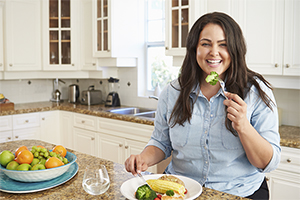 Most patients who have gastric bypass (also known as Roux-en-Y) surgery are able to maintain successful weight loss, according to the American Society for Metabolic and Bariatric Surgery. Gastric bypass surgery is credited for being the most effective treatment for obesity in Western Medicine, with with gastric sleeve surgery close behind. But not all gastric bypass patients lose weight equally or maintain their weight loss long term. Researchers at Binghampton University in New York set out to find out what factors might influence these discrepancies.

Gastric bypass surgery is reserved for patients who are morbidly obese, meaning they weigh over 100 lb more than they should for their height, which usually corresponds to a BMI >40. Type 2 diabetes is a common comorbidity for morbidly obese patients that makes the necessity of weight loss surgery more urgent. In gastric bypass surgery, a bariatric surgeon creates a small stomach pouch and then surgically connects this to their small intestine, which both limits the amount of food the patients is able to eat and relies on some malabsorption to reduce overall caloric intake.

Despite most gastric sleeve patients having similar surgeries, some have better outcomes than others. Researchers hypothesized that individual taste preferences both before and after bariatric surgery has something to do with the different outcomes. Researchers, led by Professor Patricia DiLorenzo, studied 195 patients with a BMI over 30 who had or were having Roux-en-Y gastric bypass surgery. They looked at taste and smell preferences before and after bariatric surgery to look for commonalities or trends.

Before gastric bypass surgery, most patients claimed junk foods (pizza, burgers, french fries, and ice cream) as their favorite foods. However, after gastric bypass surgery, 20% of patients listed vegetables or salads as their favorite foods. These were the patients who lost the most weight after bariatric surgery. Another interesting finding was the patients who enjoyed the smell of coffee more than before their surgery also tended to lose weight in greater amounts. Researchers hypothesized that gastric bypass surgery may have shifted patient’s preferences from sweet pre-surgery (usually associated with junk foods) to bitter (the underlying flavor of coffee and vegetables).

While the study was primarily regarding how taste preferences changed, Professor DiLorenzo made note of some interesting findings. She noted that most of the weight loss seen was in the first year after gastric bypass surgery. And 80% of gastric bypass patients were able to maintain their significant weight loss. Finally, she noted that bariatric surgery was the best way to induce weight loss for many people with obesity.

People with obesity who are struggling to lose weight through conventional methods of diet and exercise should consult a bariatric surgeon to see if gastric bypass, gastric sleeve, or gastric banding is right for them. Dr. Shillingford, MD, PA performs weight loss surgery every week at Northwest Medical Center’s Center of Excellence in Bariatric Surgery, where is proudly serves as Medical Director. Dr. Shillingford’s weight loss surgery patients come from all over Florida, including West Palm Beach, Coral Springs, Miami, Fort Lauderdale, Orlando, Naples, and Jacksonville. He performs Roux-en-Y gastric bypass, gastric sleeve, gastric band, and revisional surgery. Call for your appointment today (561) 483-8840.