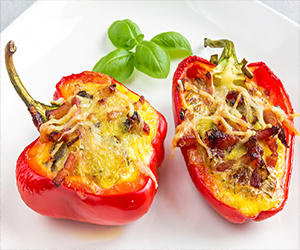 Bagels may be delicious, but at an equivalent of 4 slices of bread they are often one of the first foods to go for those who have had gastric sleeve, gastric bypass, or lap band surgery and for anyone trying to lose weight. For those looking for another vehicle for their eggs, we’ve got a pretty good substitute: a pepper.

You’re probably thinking we’re crazy for suggesting a pepper can take the place of a bagel. And, well, you’d be correct. The pepper won’t taste (or smell) like a bagel. But if you like sweet peppers, this dish will be delish. The addition of vitamins A, C, B-6, and folate from the pepper may give you a boost instead of leaving you with a heavy feeling like a bagel can.

You can customize this meal to your own taste. You can follow this standard recipe for breakfast. For lunch, you could add black beans, chipotle powder, diced onion, and avocado. For a more substantial dinner, you can add a vegetable compote under the eggs. Try sauteed onions, mushrooms, and spinach, or sauteed zucchini, steamed butternut squash, or mashed sweet potato compote. After trying these ideas, you might not even be missing the bagel.

This recipe is offered by Dr. Shillingford, M.D., P.A., a Boca Raton based general surgeon specializing in advanced laparoscopic and obesity surgery. Dr. Shillingford’s surgical weight loss patients (gastric sleeve, gastric bypass, and gastric band) come to his office from all over South Florida, the west coast of Florida, Central and Northern Florida, including Orlando and Jacksonville, as well as across the country, including Georgia, Ohio, New York, Minnesota, Texas, and Hawaii. While his patients are just as diverse as their hometowns, many are interested in finding recipes that are easy to prepare, taste good, and help keep them on track for their weight loss goal.