Men Be Warned: You Eat Nearly Double When Women are Around 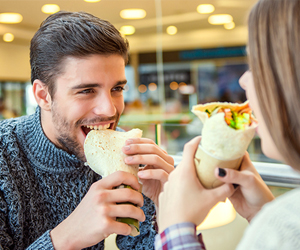 Men have a tendency to try to show off in front of women, and according to Cornell University, this behavior extends into their eating habits. Compared to eating with a group of only men, men in a group with at least one woman will eat up to 93% more. That means when a woman is present, men may eat nearly double what they would otherwise eat. Study author, Kevin Kniffin, visiting associate professor at Cornell, postulated, “The findings suggest that men tend to overeat to show off. Instead of a feat of strength, it’s a feat of eating.”

Could this paradoxical overeating behavior be contributing to obesity? If men consistently eat large quantities to impress women, this may ultimately lead to a body shape that is generally not viewed positively, thereby negating the impressive behavior.

The research may upset some people, namely the ones that display the overeating behavior, but two positives can be drawn from the study. First, the overeating behavior also was displayed with foods considered healthy, as well as other foods. For example, the men also ate 86% more salad in the presence of women than with men alone. This can be turned into a good thing.

Second, knowing about this behavior can help us control it. When eating out in the presence of mixed company, men who are trying to control their eating habits in an effort to lose weight or control high blood pressure or diabetes, can fight the urge to impress and encourage the urge to be healthy. By knowing ahead of time that they may feel the need to eat an extra slice of pizza despite not actually being hungry for it, men can more easily pass on the slice in favor of more salad. In addition, if you are hosting a party, choose your food selection wisely, always keeping in mind that some may overeat.

Eating large quantities of food to impress anyone is not a behavior that should be encouraged. Gastric sleeve, gastric bypass, and lap band patients especially should not try to eat to impress. Overeating in weight loss surgery patients may lead to feelings of nausea, as well as vomiting and diarrhea, in addition to preventing weight loss and stretching out the stomach. Gastric sleeve, gastric bypass, and lap band patients should eat when they are hungry, and should focus on consuming lean proteins, vegetables, fruits, and whole grains.

The above is offered by Dr. Shillingford, M.D., P.A., a Center of Excellence surgeon specializing in bariatric surgery. Dr. Shillingford performs over 500 surgeries a year, including gastric sleeve, gastric bypass, and lap band surgeries, as well as removals, most of which are performed at Northwest Medical Center’s Center of Excellence for Bariatric Surgery. Dr. Shillingford’s reputation for surgical excellence at affordable prices attract gastric sleeve, gastric bypass, and lap band patients come from all over Florida, including Boca Raton, Orlando, Tampa, Sarasota, Jacksonville, and Naples.