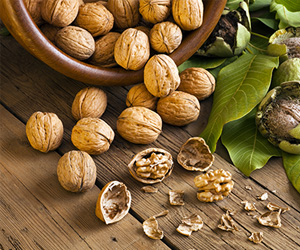 Walnuts are versatile nuts that incorporates easily into many dishes, from salads to pastas to desserts. As with most nuts, they’re not low in calories, and they’re pretty high in fat, but they pack a nutritional punch that makes them a high fat high calorie snack that’s worth it. How often do you hear that?

Walnuts are a round globe-like fruit with a hard shell that protects the wrinkly nut inside. They are sold in the shell or deshelled, salted or unsalted, raw or roasted. A one ounce portion (about 14 halves) provides 185 calories, 4 grams carbohydrates, 2 grams fiber, 18 grams fat, and 4 grams of protein. That may seem like a lot, but consider that per ounce walnuts have only marginally more calories than potato chips (185 vs 150), and walnuts at least come with health benefits.

So what are the reasons that make walnuts a better snack than deliciously salty potato chips? First, while calorically they are similar, nutritionally walnuts overpower traditional potato chips. Walnuts have more protein, fat, and fiber than chips, which can contribute to feelings of satisfaction and fullness. Walnuts also have high levels of manganese and copper.

Second, the fat in walnuts is a combination of monounsaturated and polyunsaturated fatty acids, which has been shown to lower LDL cholesterol and triglyceride levels, which reduces the risk of heart attack, cardiovascular disease, and stroke. In fact, one study showed that consuming an ounce of nuts 4 or more times per week reduced the risk of cardiovascular disease by 37% compared to those who never or rarely consumed nuts.

Believe it or not, nuts may also contribute to weight loss despite their caloric content, which is good news for gastric sleeve, gastric bypass, and gastric band patients. Routine nut consumption has been associated with higher resting energy expenditure, which is how many calories the body burns in a 24 hour period while at rest. Also, in studies comparing weight loss, greater weight loss was seen in those participants whose weight loss diets included nuts.

In what seems like a coincidence, nut consumption is associated with a reduced risk of cholecystectomy, or surgical removal of the gallbladder. Considering the gallbladder is an organ used for secreting digestive enzymes used to break down fats, this statistic may seem counterintuitive. But out of over a million people, women who consumed 5 ounces of nuts per week had a significantly lower incidence of gallbladder removal than those who ate an ounce or less of nuts each week.

Lastly, walnuts are a good source of both manganese and copper, two minerals associated with bone health. Deficiencies in copper and manganese can lead to low bone mineral density and osteoporosis. Magnesium, another mineral present in walnuts, helps the body absorb calcium into the bone. These three nutrients make walnuts a much better choice over chips for bone health.

Walnuts are easy to incorporate into your diet. You can snack on them plain or with other nuts, or incorporate them into a dish. Walnuts easily mix with oatmeal or yogurt, you can crush them on top of a sliced banana. They add a nice crunch to salads, and provide the base for homemade pesto sauce. Crushed walnuts make a nice crust for fish or chicken. Ways to use walnuts seem endless, and that’s a good thing. Try to incorporate them into breakfast, lunch, dinner, or snacks at least a few times a week.

The above Food Highlight is offered by Dr. Shillingford, M.D., P.A., a board certified surgeon specializing in laparoscopic and bariatric surgery. Dr. Shillingford’s gastric sleeve, gastric bypass, and lap band patients come from all over South Florida including Boca Raton, Delray Beach, Wellington, Coral Springs, Miami, and Palm Beach. His bariatric surgery patients are often seeking information of foods that can be incorporated into their post surgical diets that contribute nutrients needed for good health, and walnuts are a good choice.